Your child should know basic gun safety by age of 7.

If your kid doesn't know how to properly handle a firearm by 7 years old (hell earlier the better) then you did something wrong as a parent. You should be able to put a loaded handgun on a table and your child should know not to point it at anyone and should be able to check if its loaded and always treat a gun as loaded no matter if it's loaded or unloaded. That's basic safety. Always treat a firearm as if it was loaded. Double check to see if it is or isn't loaded everytime you pick it up or hand it to someone. You should be able to trust your child with a handgun but keep them supervised at all times and keep your guns safe people. Unpopular opinion but that's why it's here. If you live in America or any other countries were guns are legal (even if you don't have them personally) teach them gun safety.

Edit and clarification The amount of people not understanding my post is kinda mind boggling. Teaching your kids to respect dangerous things such as a busy street or train tracks is important. Teaching kids not to run Infront of a moving car is important just like teaching kids to not play with guns. Guns are not toys and streets are not playgrounds. I never said kids should be able to be able to defend themselves with a gun (like some comments are assuming I mean by handle) that's crazy. thinking kids will never cross a street is crazy. And in some areas and especially parts of America (but any country that has guns not just America) kids are going to encounter a gun. Being able to check if it's loaded and being safe is important. Just like being able to realize if a car is on. or not. Kids shouldn't be around cars with the engine running by themselves same thing.

Pant or whatever you're wearing down there

LPT: For the love of all that's good, clear the snow and ice off the roof of your car.

The amount of people on here that think nothing of it is horrifying and astonishing. Temporarily being unable to see and having ice smash your windshield are the two biggest dangers here and everyone seems to just brush it off because it's never happened to them. Fuck you all are lazy and careless. CLEAR YOUR CAR

To clarify I mean the snow and ice on the top of your car is going to come hurling at the car behind you. Yes it can impede you as well while braking. And yes, don't drive close to cars anyway.

The Fed is trapped, they have to hike rates, but they wont make it very far before breaking the markets this time. I predict only 5 rate hikes this cycle, details below

The fed has fucked up. Inflation wasn't transitory and their favorite measure, core PCE, is the highest it's been in 4 decades.

Now they have to look like they are fighting inflation by raising rates and tapering asset purchases. They are talking quite a big game right now. Many fed officials are talking about a fed funds rate at 3-4% and several are even mentioning balance sheet runoff.

I'm here to tell you they are completely full of shit. We won't even get close to 4% fed funds rate this cycle. And that's because as a nation we are increasingly dependent on low interest rates to finance the national debt (as well as private debt).

That's because the national debt has absolutely exploded over time. Debt to GDP has increased from 30% in the 70s to 125% now.

This massive increase in the debt means that interest payments on that debt increase as the fed raises interest rates. Thus every hiking cycle for the past 40 years has resulted in a lower and lower peak fed funds rate before the market breaks and the fed capitulates and begins easing again (aka the money printer kicks into high gear). The last peak in 2018 was a fed funds rate of 2.25-2.50% before markets plunged 25% in the 4th quarter. 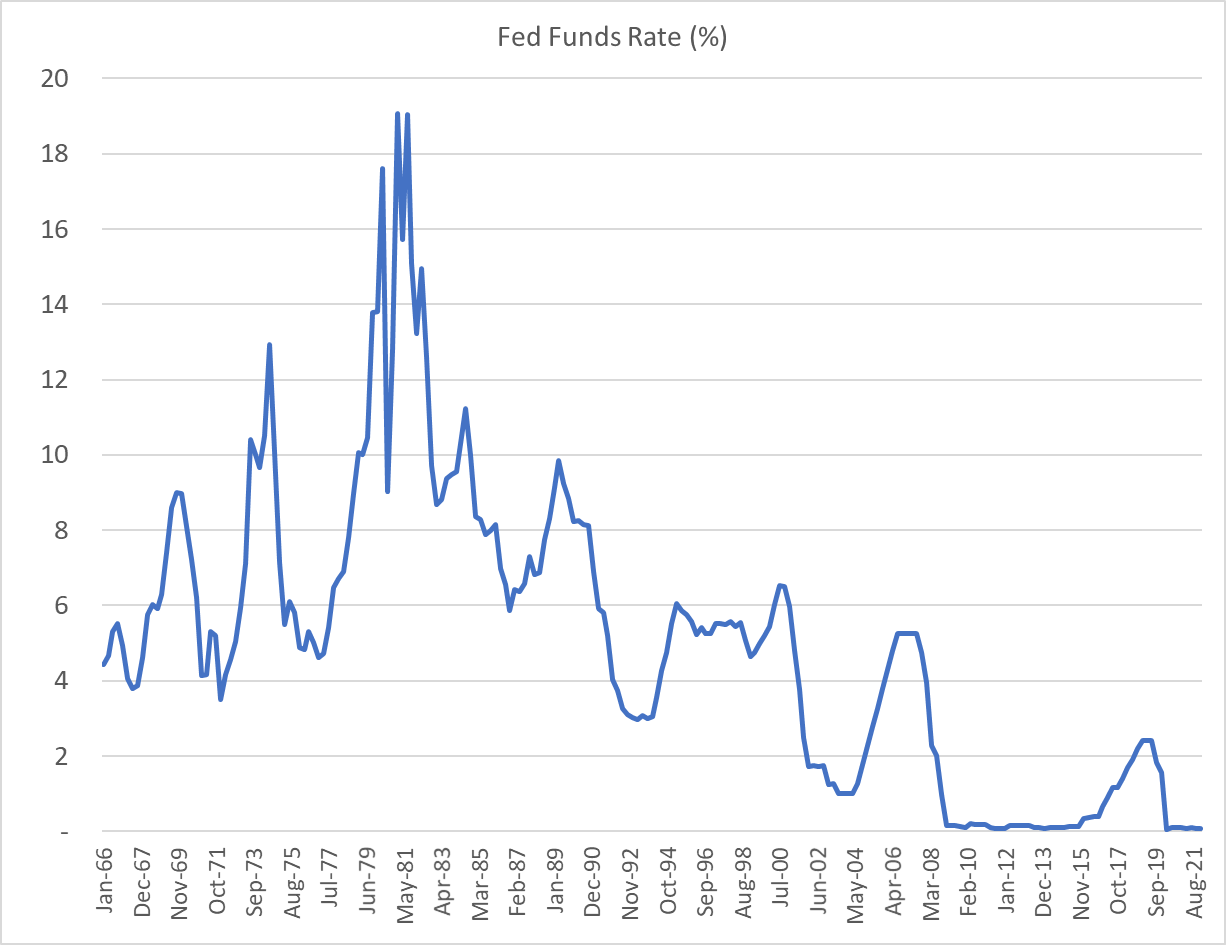 But the debt is even higher now than it was in 2018, so we know the next ceiling will have to be lower as well. I've analyzed this by looking at the average of the fed funds rate and the 5-year treasury yield and multiplying this combined rate by the national debt.

If we assume both rates increase in tandem by 25 basis points per quarter, and the national debt goes up a paltry $300 billion quarterly (its been going up much faster than this recently), then we will cap out at just 1.25-1.50% this cycle. Likely in the 2nd quarter of 2023. 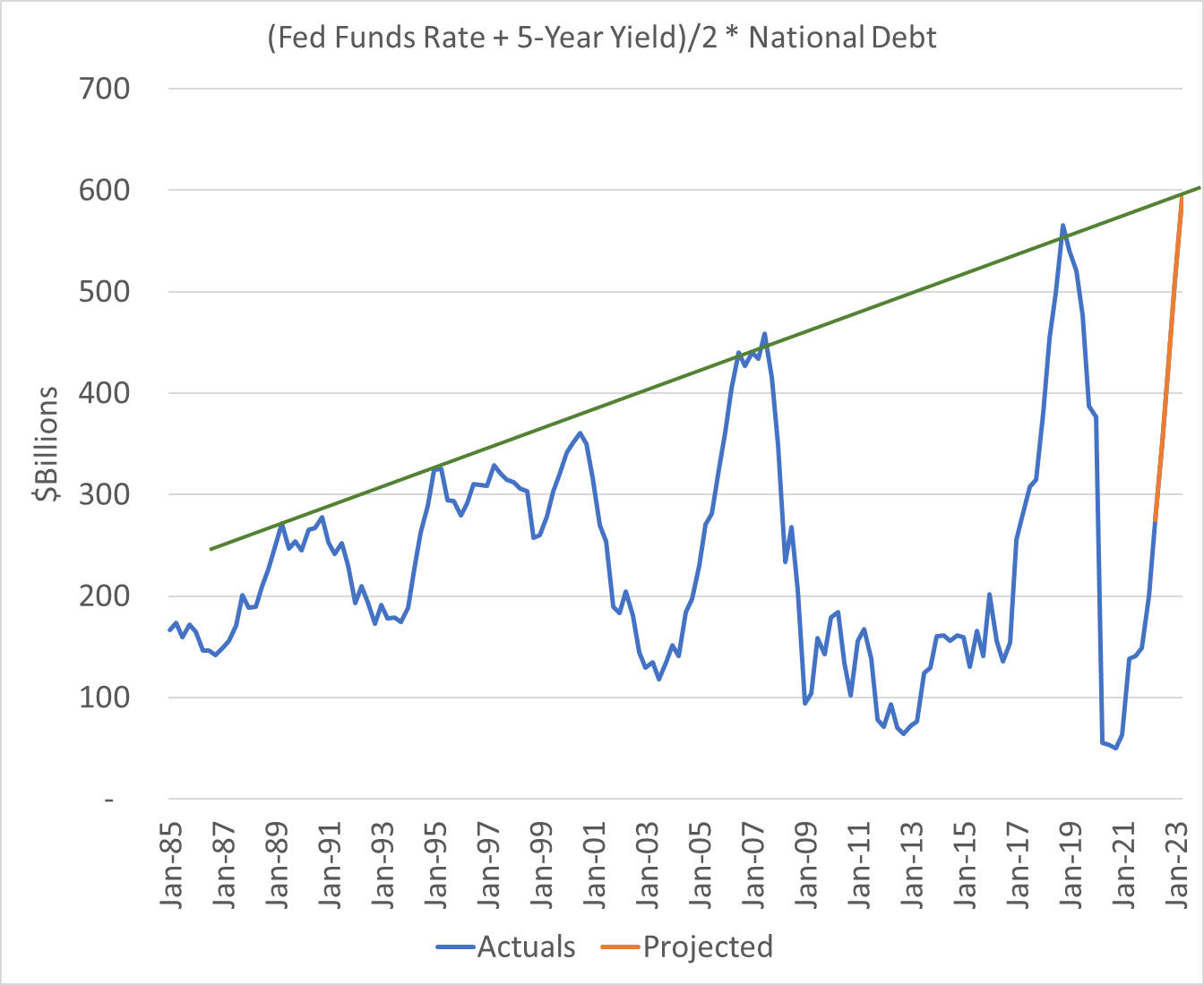 So when markets are crashing after only the 5th rate hike, and inflation is still running at over 5% annually, just know that the fed is going to capitulate and save the markets by easing again.

This is a big problem, because you need treasury yields to get above inflation expectations in order to encourage savings instead of spending to stop inflation. In the 70s, with debt to GDP at only 30%, we were able to do just that. It wasn't painless (look at the recession of the early 80s), but we did it. With inflation at 5-10%, we can't even get close to stopping it without absolutely decimating the stock market and the economy.

So the fed is trapped. They are going to have to choose between switching to easing and saving the economy and stock market, or continuing to hike in an attempt to kill inflation, but also causing the great depression 2.0 in the process. I'm confident they will choose to save markets and stop fighting inflation as the tradeoff, which means that the inflation trades at that point will be going absolutely bananas.

And that's because the US will finally be embarking on monetary policy akin to a banana republic by lowering rates while experiencing high inflation.

So make sure you get YOUR bananas over the next year to prepare for this utter bullshit of a ride that the fed is about to take us on. For me that means precious metals (specifically silver via PSLV and physical, not SLV which is a bullshit ETF). I also like platinum and uranium a lot as well. For others it could mean other commodities, energy plays, or real estate. Or even just buying a whole bunch of shit before it goes up in price.

Good luck my friends, this is the end game!

How Matt Damon thought we'd react to his commercial

Netflix got no chill.